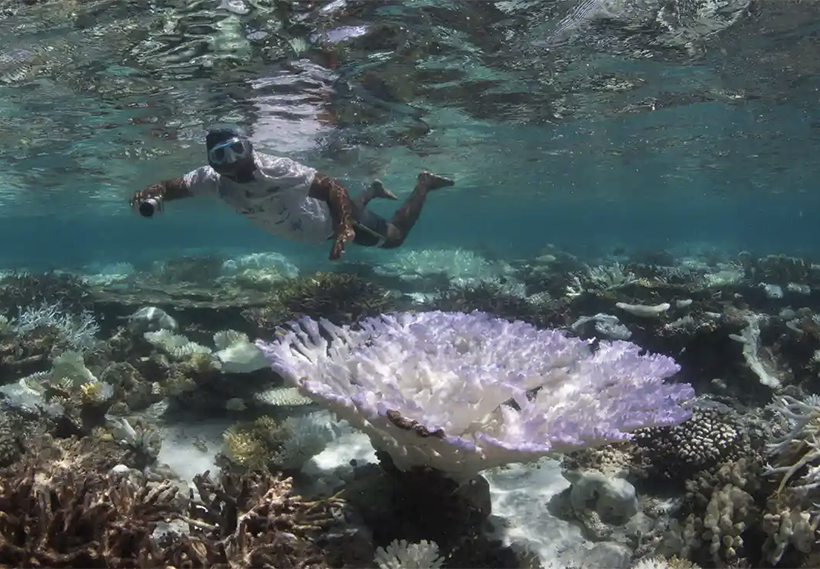 Climate and nature crises: solve both or solve neither, say experts

Humanity must solve the climate and nature crises together or solve neither, according to a report from 50 of the world’s leading scientists.

Global heating and the destruction of wildlife is wreaking increasing damage on the natural world, which humanity depends on for food, water and clean air. Many of the human activities causing the crises are the same and the scientists said increased use of nature as a solution was vital.

The devastation of forests, peatlands, mangroves and other ecosystems has decimated wildlife populations and released huge amounts of carbon dioxide. Rising temperatures and extreme weather are, in turn increasingly damaging biodiversity.

But restoring and protecting nature boosts biodiversity and the ecosystems that can rapidly and cheaply absorb carbon again, the researchers said. While this is crucial, the scientists emphasise that rapid cuts in fossil fuel burning is also essential to ending the climate emergency.

They also warned against action on one crisis inadvertently aggravating the other, such as creating monoculture tree plantations that store carbon but are wildlife deserts and more vulnerable to extreme weather.

“It is clear that we cannot solve [the global biodiversity and climate crises] in isolation – we either solve both or we solve neither,” said Sveinung Rotevatn, Norway’s climate and environment minister.

The report identified actions to simultaneously fight the climate and nature crises, including expanding nature reserves and restoring – or halting the loss of – ecosystems rich in species and carbon, such as forests, natural grasslands and kelp forests.

“It’s very disturbing to see the impacts over recent years,” said Prof Alex David Rogers, of conservation group REV Ocean and the University of Oxford, and a report author. “Between 1970 and 2000, mangrove forests have lost about 40% of their cover and salt marshes an estimated 60%. We’ve also lost half of coral cover since Victorian times.”

Food systems cause a third of all greenhouse gas emissions, and more sustainable farming is another important action, helped by the ending of destructive subsidies and rich nations eating less meat and cutting food waste.

The scientists also warned against actions that tackled one crisis but worsened the other. “When I went for a walk in a plantation forest in England, it was sterile. It was a single, non-native species of tree,” said Prof Camille Parmesan, of the University of Plymouth. “There was nothing else there, no insects, no birds, no undergrowth. You might as well have built a concrete building.”

Past tree planting on carbon-rich peatlands that had never been forested was another example, said Smith. “That was an epic fail for the climate and for biodiversity.”

Planting very large areas with single crops to burn for energy was also problematic, even if the CO2 was captured and buried, Smith said: “To get the billions of tonnes of carbon removal that has been proposed in some scenarios for global stabilisation of climate, you would need thousands of millions of hectares – an area twice the size of India.”

Protecting and restoring natural ecosystems was the fastest and cheapest way to remove CO2 from the atmosphere, the scientists said. Cutting fossil fuel emissions was essential, but not enough at this point in the climate crisis, said Parmesan. “We cannot avoid dangerous climate change without soaking up some of the carbon that we’ve already put into the atmosphere and the best way to suck up carbon is using the power of plants,” she said.

“The science of restoration of ecosystems has really blossomed over the last 40 years. We are now able to efficiently and effectively restore complex systems, tropical rainforest, coastal wetlands, kelp forests and seagrass meadows, natural American prairie, and UK meadows back to their near historical diversity.”

Prof Mark Maslin, of University College London, said the report was seminal: “The science is very clear that climate change and biodiversity are inseparable. To stabilise climate change we need massive rewilding and reforestation.”

The UK environment minister, Zac Goldsmith, said: “This is an absolutely critical year for nature and climate. With the UN biodiversity [and climate summits], we have an opportunity and responsibility to put the world on a path to recovery. This hugely valuable report makes it clear that addressing biodiversity loss and climate change together offers our best chance of doing so.”