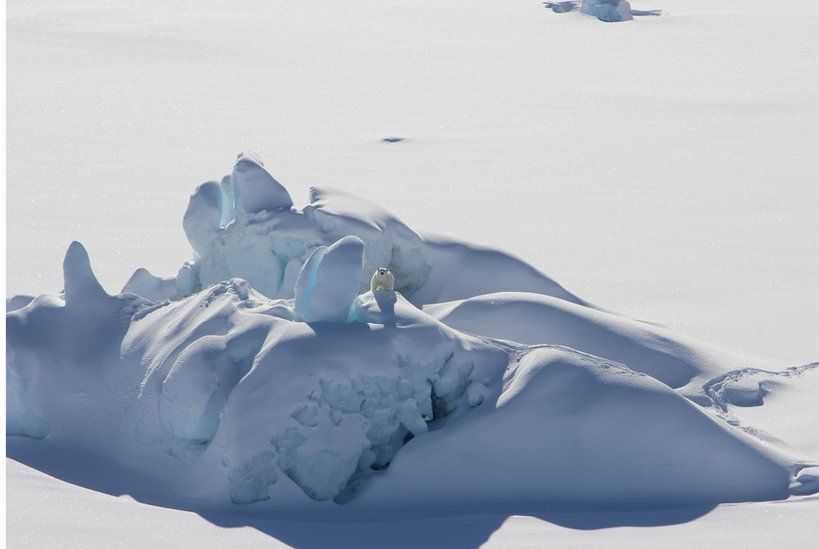 A new study finds that an area of the Arctic Ocean critical for the survival of polar bears is fast becoming vulnerable to climate change.

The region, dubbed the “last ice area” had been expected to stay frozen far longer than other parts of the Arctic.

But this new analysis says that this area suffered record melting last summer.. The researchers say that high winds allied to a changing climate were behind the unexpected decline. The Wandel Sea area, to the north of Greenland, is part of what scientists call the “last ice area”. Normally, this region retains thick, multi-year ice all year round.

“Sea ice circulates through the Arctic, it has a particular pattern, and it naturally ends up piling up against Greenland and the northern Canadian coast,” said Axel Schweiger, from the University of Washington and lead author of this latest study. “In climate models, when you spin them forward over the coming century, that area has the tendency to have ice survive in the summer the longest.”

Scientists consider the area to be an important last refuge for Arctic marine mammals including polar bears, ice-dependent seals and walruses. Polar bears in the area use the ice to hunt for seals who build dens to raise their young on the frozen water. In August last year, the German research vessel, the Polarstern sailed across the Wandel Sea, and unexpectedly encountered stretches of open water where thick ice would normally be found. Researchers have now used a combination of satellite imagery and sea ice models to understand what happened in the region. Adding to the puzzle were satellite measurements from spring last year showing that sea ice in the Wandel Sea was thicker than in recent years.

However, by August 2020, the images showed a record low of just 50% ice concentration. According to the researchers, unusually strong winds moved much of the sea ice out of the area – but this was enhanced by a thinning trend, related to warming, that’s been going on for years.

“During the winter and spring of 2020, you had patches of older, thicker ice that had drifted into there, but there was enough thinner, newer ice that melted to expose open ocean,” said Axel Schweiger. “That began a cycle of absorbing heat energy to melt more ice, in spite of the fact that there was some thick ice.”

The researchers say that the record melt was 80% due to weather related factors such as the winds, and 20% from thinning related to climate change. Ironically, in 2019, Canada designated part of the last ice area as a marine protected area – named Tuvaijuittuq, which in the language of the people who live in the area means “the place where the ice never melts”.

The authors say their new work suggests that climate models might need to be re-examined, as most did not predict the low sea ice concentration seen in the region in 2020 for several decades or more into the future. The study also raises questions about the impacts of more open water on marine mammals in the area.

“We know very little about marine mammals in the last ice area,” said co-author Kristin Laidre, also from the University of Washington. “We have almost no historical or present-day data, and the reality is that there are a lot more questions than answers about the future of these populations.”

The study has been published in the journal Communications Earth & Environment.