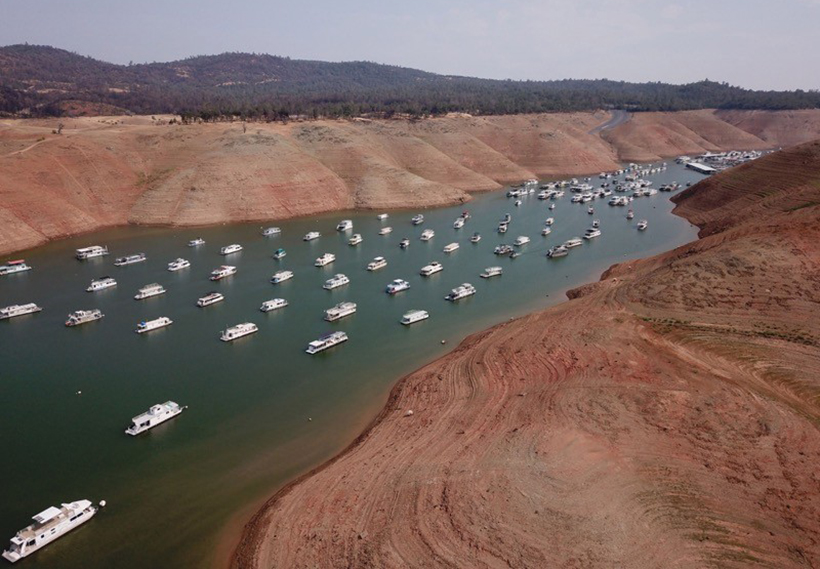 Landmark assessment says that greenhouse gases are unequivocally driving extreme weather — but that nations can still prevent the worst impacts.

Modern society’s continued dependence on fossil fuels is warming the world at a pace that is unprecedented in the past 2,000 years — and its effects are already apparent as record droughts, wildfires and floods devastate communities worldwide — according to a landmark report from the United Nations on the state of climate science. The assessment from the UN’s Intergovernmental Panel on Climate Change (IPCC) says things are poised to get worse if greenhouse-gas emissions continue, and makes it clear that the future of the planet depends, in large part, on the choices that humanity makes today.

“The evidence is everywhere: if we don’t act, the situation is going to get really bad,” says Xuebin Zhang, a climatologist at Environment Canada in Toronto, Ontario, and a coordinating lead author on the report, released on 9 August.

Compiled by more than 200 scientists over the course of several years and approved by 195 governments during a virtual meeting last week, the report is the first in a trio assessing the state of climate change and efforts to mitigate it and adapt to it. The document — part of the IPCC’s sixth climate assessment since 1990 — arrives less than three months before the next major global climate summit in Glasgow, UK. There, governments will have the opportunity to make pledges to reverse course and decrease their emissions.

If global emissions hit net zero by around 2050 — a target that many countries have committed to over the past year — then the world can achieve the goal laid out in the 2015 Paris accord and limit global warming to 1.5 °C above pre-industrial levels over the course of the twenty-first century, says Valérie Masson-Delmotte, a climatologist at the Laboratory of Climate and Environmental Sciences in Gif-sur-Yvette, France, and co-chair of the physical-science working group that produced the current report. “The climate we experience in the future depends on our decisions now,” she says.

Earth’s global surface temperature has increased by around 1.1 °C compared with the average in 1850–1900 — a level that hasn’t been witnessed since 125,000 years ago, before the most recent ice age. This is just one of the blunt facts appearing in a summary released with the IPCC report that is intended for policymakers.

The overall assessment underscores efforts to pin down how much more temperatures will rise if atmospheric emissions continue, and provides climate scientists’ most confident projections yet for the twenty-first century. One key metric that researchers use to make their projections is ‘climate sensitivity’, a measure of how much long-term warming would be expected on Earth from a doubling of atmospheric carbon dioxide concentrations compared with pre-industrial levels. Although the IPCC’s best estimate remains at 3 °C, the report reduces the uncertainty in that figure, narrowing the probable range to 2.5–4 °C, using evidence such as modern and ancient climate records. This compares with 1.5–4.5 °C, the wider range for sensitivity reported in the IPCC’s last climate assessment, released in 2013.

This narrowing of climate sensitivity bolsters scientists’ confidence in their projections for what will happen on Earth in a number of different scenarios. In a moderate emissions scenario that features little change from today’s global-development patterns, for instance, average global temperatures will rise by 2.1–3.5 °C, according to the IPCC report. This is well above the 1.5–2 °C limit laid out as a goal by the nations that signed the 2015 Paris climate agreement. Even in a scenario in which governments aggressively cut their greenhouse-gas emissions, the report projects that global temperatures are likely to surpass the 1.5 °C threshold in the coming years, before dropping back below it towards the end of the century.

“Is it still possible to limit global warming to 1.5 °C? The answer is yes,” says Maisa Rojas, a coordinating lead author on the report and director of the University of Chile’s Center for Climate and Resilience Research in Santiago. “But unless there are immediate, rapid and large-scale reductions of all greenhouse gases, limiting global warming to 1.5 °C will be beyond reach.”

The report lists a dizzying array of impacts that climate change has had on Earth — and that are already evident from pole to pole. The coverage of sea ice in the Arctic during the late summer has been lower over the past decade than it has been in at least 1,000 years. The ongoing global retreat of glaciers is unparalleled in at least 2,000 years. And oceans are heating up at a pace not seen since the end of the most recent ice age, 11,000 years ago.

Beyond these sobering measurements, the IPCC report emphasizes some of the most significant scientific advances in understanding the regional effects of climate change, including where extreme heat, precipitation and drought have hit hardest. Extreme drought, for instance, has affected various regions around the globe, with particularly widespread impacts in the Mediterranean region and in southwest Africa.

As temperatures rise in the future, says Zhang, extreme weather events will become increasingly severe. Over land, an extreme temperature event that occurred once every 50 years in centuries past will probably occur every 3–4 years if Earth reaches 2 °C above pre-industrial temperatures, according to the report. The world should also expect more compound events, such as heatwaves and long-term droughts occurring simultaneously.

“We are not going be hit just by one thing, we are going to be hit by multiple things at the same time,” says Zhang.

Global warming’s impact on bodies such as glaciers, ice sheets and oceans, which adjust slowly to rising temperatures, will continue to be felt for centuries or even millennia, according to the report. Sea levels around the world are projected to rise by 2–3 metres over the next 2,000 years, even if temperatures are held in check at 1.5 °C of warming, and up to 6 metres with 2 °C of warming, which would alter entire coastlines currently inhabited by hundreds of millions of people.

The report warns that some of the most severe impacts of climate warming — such as ice-sheet collapse, massive forest loss or an abrupt change in ocean circulation — cannot be ruled out, particularly in scenarios in which high emissions and significant warming occur towards the end of the century. But it notes that the biggest uncertainty in all climate-change projections is how humans will act.

Although the IPCC has been warning about the perils of global warming for three decades, governments have yet to take the kind of action necessary to transition to clean-energy sources and halt greenhouse-gas emissions. But perhaps things are about to change, says Zhang, if only because people all over the world are starting to seeing the impacts of climate change around them.

“Climate change is happening, and people actually feel it,” says Zhang. “The report just provides scientific validation to the general public that, yes, what you feel is actually true.”

But the IPCC report also states something even more important: many of the most dire effects of climate change can still be avoided if aggressive action is taken now. Every degree of warming matters, says Rojas. “That is a very powerful idea,” she says. “The future is in our hands.”